If water is the life-blood of a brew, grain is the backbone. It provides the necessary raw materials for yeast to turn water into beer. Unlike some of the other essential elements to the brew process, most of the affects of malt are surprisingly easy to detect, even aside from the sweetness they produce. The types of grain used provide color, flavor, even alcohol content (just to name a few.) The determining factor comes down to the grain bill, or the variations and quantities of malt used.

“Malt” (or “malting”) is technically a process, not a grain. It is the way grain becomes suitable for fermentation, through an arduous system of steeping, germinating, and then drying. “Malt”, therefore, refers to grain post-process.

It is also important to note that many types of grain may be used and certainly have a big impact on the outcome. Wheat, for instance, is going to produce a much different type of flavor than a beer brewed with Rye. The most common grain used, however, is Barley due to both availability and functionality.

When creating a grain bill for a recipe, you start with Base Malts. These are pretty well exactly how they sound- a mixture of (usually) different varieties of malt that offer food for the yeast. That is their main priority and they do it well. Sometimes, they offer slight hints of flavors such as honey or bread but, otherwise, tend to keep to their assigned task. The more base malts used, the more “food” for the yeast, and the higher the alcohol content.

Once these have been determined, other varieties of malt are added. These tend to lend more to flavor and aroma than base malts. These varieties can be categorized into Pale/Light Malts, Caramel, and Roasted/Dark Malts. The categories are named for their levels of  “malted” product. The Pale is only lightly roasted while the Dark is deeply roasted and the sugars in Caramel Malts have been caramelized. These create a spectrum of colors and flavors ranging from very light to very dark and very sweet to very toasted, respectively.

Other materials, such a corn, oats, or rice, may be used as well. These are referred to as “adjuncts” and are used primarily to adjust body and head of a beer. 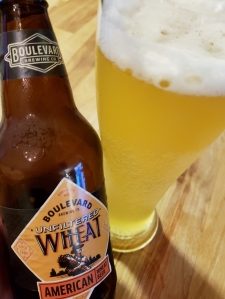 As the name suggests, this is a wheat beer. This typically means that this style was brewed with primarily wheat grain. Using wheat instead of barley does impact the finished product. Wheat tends to have higher protein yields which, in turn, makes a longer-lasting, foamier head as well as impacts its mouthfeel (the way the body of the beer feels when you take a drink.) Using wheat also tends to give the beer a slight haze, which adds to the stability of the beer. Many brewers filter this out due to consumer appeal, although some are starting to leave it natural. Usually, a hazy beer is completely suitable to drink and, in this case, will add to the experience and understanding of the beer. This style is malty all the way through, from the sweet aroma to the bread-like flavor.

And if we change the grain bill up just a bit… 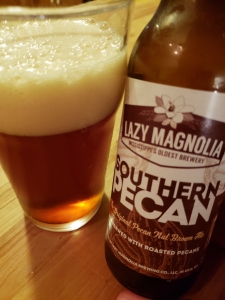 Southern Pecan is a Brown Ale, which is one of the original styles that brought me to the love of craft beer. In general, a Brown Ale has a much deeper flavor, especially when compared to a Wheat. The grain bill can include a multitude of different malts and has a lot of wiggle room. In general, though, some Amber malts are used, which gives a similar color to its name and some mild roastiness to the flavor. Chocolate malt is also used in varying quantities and, yes, it does provide a chocolate-like taste, although it won’t pass for liquid Godiva without some help. Other dark and roasted malts are added which, as you can imagine, give a roasted or toasted flavor and aroma. Some malts added may even give a Brown Ale a slight nuttiness- especially in this case, where whole pecans are added in and used just like grain.

As I’ve mentioned so many times before, the myriad of possibilities with beer is just about endless. Malt is one of the many examples of how a brewer can quickly turn into a mad scientist. It is quite enjoyable to see how changing just one element of the big picture can alter the end product so drastically- and even more enjoyable to taste it!

So here’s to the one bill no one minds paying.

“If you can’t explain it simply, you don’t understand it well enough.”
-Albert Einstein

Beer is living, drinkable, attainable art. But, unlike some masterpieces, it isn’t meant to be appreciated for its unattainable mystique. In fact, the more you understand about this particular craft, the more enjoyable it becomes. While there is always something new to learn, it’s pretty easy to cover the basics. We’ll save the details for later. But, for now, I’ll give you my version of beer Cliffsnotes.

The four main ingredients in any beer:

Just like in humans, the majority of beer composition and the beer making process is water. While this seems pretty basic, the kind of water used can dramatically change the outcome of the beer. Think, for example, how tap water can vary from city to city. The chemical and mineral make up, additions or subtractions to the water, even place of origin can make all the difference. In fact, if you brew the same exact recipe using two different water samples, the taste is still going to vary.

Not to be outdone by water, grain also makes itself essential to any recipe. Most of the time, before brewing, this grain must go through a process known as “malting,” which causes it to become fermentable whereas it was not before. For this reason, most brewers refer to the grain part of the recipe as the “malt.” There is a wide variety of different malts (which I will explore in depth at a later time) and, depending on what is used, this changes the flavor, as well as several other characteristics. Rarely is a single type of malt used (there are exceptions) and the collection of malts, referred to as the “grain bill,” gives a beer depth of flavor and complexity.

Using only malt, however, would make the beer unbearably sweet and that is where the bittering agent comes in. Usually this is in the form of hops, although some varieties and most early beers used different sources. Hops are the flowering part of the plant Humulus lupulus and, besides sounding like a spell straight out of Harry Potter, they are responsible for balancing out the sweetness of the malt. They also add their own notes of flavor and aroma, which changes depending on kind(s).

The unsung hero of the brew, however, is yeast. This wonderful concoction we know as beer would not be possible without it. Yeast does the hard work of changing the sugars found in the malt (Yay buzz word!) into that wonderful thing we know as drinkable alcohol. While there are countless forms of yeast, only a couple are suitable to apply to the brew process.

These four elements are all widely accepted as being essential to the beer making process. So much so that, in the 1500s when Germany began to limit what could be used in brewing, these were the only four included. (To be historically accurate, it was only three elements originally but when yeast and its function in beer became better understood, the law was revised to add the fourth.) This was known as the German Purity Law(s) and, while it was not primarily put into place for quality but more for economical purposes, it does illustrate the importance of each component.

Thankfully, now however, there are far fewer limitations on what brewers can add to the process which opens up a world of possibilities. While these four elements are still necessary, there are so many options within each category and brewers are coming up with more every day. Beyond that, even, there is almost no restriction to what can be added. I have tasted beers made with donuts, bacon, even tree bark.

So let your creativity and imagination run wild.