I don’t know about you guys, but I have never been one to follow fads. I have never been up on the latest fashions or honestly even cared what was popular. Not that it’s a bad thing, it’s just never been my thing. That being said, beer trends have fascinated me from the very beginning of my craft beer journey. It is incredible to me that, in an ever-growing world full of endless possibilities, enough people can still come together to agree on a certain style of beer.  We have previously discussed the beer trend of the New England style IPA. Today, however, we will be looking at a new up-and-comer. The Nitro Smoothie/Milkshake beer.

This is one of the coolest styles I’ve seen in awhile for a multitude of reasons. The first is that it is a nitro beer. Nitro being short for, ya know, Nitrogen. Most beers use carbon dioxide, so this is already a bit different. The main reason for using Nitrogen is to cause smaller bubbles so the head seems thicker and creamier. Which leads us to the smoothie part of the beer. Depending on the brewery, I have seen these referred to as milkshake but, more commonly and perhaps more aptly, as smoothie beers. I have seen so many varieties from Stouts to IPAs, but the main things they have in common are they are brewed with lactose (which adds some body and definitely some sweetness) and they typically have smoothie/milkshake flavors, such as mango or vanilla.

The Drink Along: Whipped |  Stillwater Artisanal and Oliver Brewing collaboration

There are actually several different versions of the Whipped collaboration, including an IPA. However, I chose the style that most called to me: Sour Raspberry Nitro Smoothie Ale. (Most are referring to this as Volume 3, I believe.)

The first thing that caught my eye was the vintage can design which is, frankly, groovy. The second is the instructions. Shake up and then pour. Well, alright. Typically counter-intuitive to most beers, however this actives the nitrogen and doesn’t make nearly the mess it would with other beers.

The head on this beer was gorgeous. Full, thick, and creamy. Make all the inappropriate jokes you want but it was impressive. 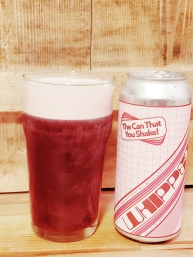 The major downside is it came out smelling very much like burnt rubber. I have talked with several people who have tried this and haven’t had this issue so it is definitely just the particular batch. It could come from a couple different issues but I won’t really fall down that rabbit hole.  The main thing is it definitely wasn’t kept cold enough (can instructs to keep ice cold) so I will definitely have to get another one…..for science.

While very off-putting at first, I gave it a chance and let the smell dissipate. And I’ll tell you, I wasn’t disappointed. It certainly has a heavier, denser feel than most sour ales and tastes super creamy, as well. It really lives up to the smoothie descriptor. To be honest, it was so close I half expected to accidentally wind up with a raspberry seed in my teeth. The fruit flavor comes through smoothly and very balanced. Surprisingly, even with the added sweetness, the sour aspects came through as well.

Hands down, I think the two most important things to keep in mind when drinking craft beer are to have both an open mind and a decent amount of bravery. Some batches or even entire beers don’t turn out and can have some…interesting…side effects, like a rubber smell. Admittedly, there is also a level of common sense on when to abandon that particular ship for more more flavorful –  I mean, favorable- seas. But, in this case, my bravery was rewarded. I certainly understand why so many people have become enamored with this style and, if anything, this experience has made me even more curious to see what others are doing. And to even try a different batch of this one.

So la la la la the beers are waiting.