“A couple more shots of whiskey, I’m going down to Minglewood.”
-Grateful Dead

The sun was shining as I strolled down the sidewalk and up to the doors of Minglewood Brewery. The outside architecture hinted at the past stories of this river town building constructed in 1891. Suffice it to say, this building has seen some sights.  This historically registered establishment was originally home to a Masonic temple, then a well known local music store and, most recently, is the residence of Minglewood Brewery.

As I enter, I catch my favorite Blues Traveler song floating on artisan pizza-scented air that fills my nose and causes my stomach to rumble. Humming along, I take a seat at the bar, a gorgeous wood installment that is reminiscent of dark driftwood. In fact, the entire brewery is a stunning blend of dark wood, brick, and Edison lights.

A friendly bartender takes my order and, after,  I take a moment to glance around, participating in my favorite sport of people watching. The strangest sight catches my attention. I notice that, unlike anywhere else, hardly anyone is on their phones. Instead of growing another digital appendage, everyone is interacting with each other, content just conversing and laughing in the comfortable atmosphere that is the brewery. There’s a couple clearly on their first date who are breaking the ice over a gigantic Bavarian pretzel and house-made beer cheese. At the next table, a girl snarls her nose up at her friend offering her a beer, emphatically stating she does not like beer. Her friend, rolling her eyes, pushes it her way with a “Just try it.” The girl reciprocates the eye roll and takes the tiniest of sips. And then a big gulp. “You know, that’s really good. Is that what beer is supposed to taste like?” she asks.  A bit further down, there’s a group of businessmen who are making it very clear they’re excited that their boss chose to have their meeting at a place with beer on tap and rugby on television.

A smiling server brings me out of my own thoughts by placing a pizza in front of me. I notice three things immediately. One, that pizza is the best looking pizza I think I’ve ever seen. Two, not only is she smiling, but all the servers and bartenders are too, even while they’re briskly walking around. Which makes me and everyone they interact with smile. Three, did I mention that pizza, though??? It’s a taco on a pizza! Not to mention, made with grain from the beers: Bonus!

Of course, this glorious meal would not be complete without a beer. While the tap offerings are all in close but delicious competition with each other for my ‘favorite,’ the Satellite IPA wins out today. While IPAs are typically not my go-to, this version of a New England style IPA is perfection, easily my favorite example of the style. Stuart Matthews, owner of Minglewood, agrees. “[New England IPA] is a style that’s growing in popularity despite its non traditional hazy appearance.  But the tropical fruit aroma and low bitterness has made it my go-to beer as of late.  And my number one selling beer as well.” And he isn’t exaggerating. Stuart tells me that the first couple batches of the Satellite sold out in just a few hours and demand has only increased.

While being one of the first to successfully bring this style to the area, it is far from the only aspect that makes Minglewood stand out. “The most recent thing that makes Minglewood unique is that we’re the first brewpub in the state to deliver beer with our pizza.  We have a phone app and customers can order from our website.  It’s city wide in Cape Girardeau.  Only on weekends as of now.” And if that isn’t enticing enough, they also can beer directly off the tap at request that can be taken home in an insulated brown bag designed specifically to fit. 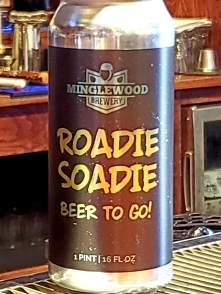 And if you don’t think that’s the best name ever, you’re just wrong.

Minglewood certainly has a wide array of offerings. The variety and flavor of their artisan pizza menu is enough of a head turner on its own, but when paired with beer that is made with precision and passion, they just can’t go wrong. Nor do they intend to. Unlike some businesses that get comfortable and lax after their first few years, Minglewood has made it clear they’re just getting started. With new styles of beer being expertly brewed all the time and their evolving relationship with the local community, they strive to prove that everyone has a place in the craft beer world, even if you’ve never experienced craft beer before.

“If you’re not familiar with craft beer and you’re willing to expand your pallet, then there’s a Minglewood beer for you.”

And you better believe I will be back for Minglewing Monday.

And yes, I did, in fact, finish that entire pizza by myself.