Tucked away between rolling green hills and rich foliage is a hidden gem of Ste. Genevieve county: Charleville. Boasting not only a brewery and a winery, Charleville also provides a B&B, just in case you realize you’re not quite ready to say good-bye to those picturesque views.

Brought to life 15 years ago by Jack and Joal Russell, Charleville has become a family dream. Their son, Tait, is the Director of Operations at Charleville, which is actually a family name itself.

Jack and Joal Russell (who are the sweetest people you’ll ever meet, by the way.)

Tait let me in on a little secret: he hasn’t always liked craft beer. But, just like many of us on the path to craft beer, one day he stumbled into love at first drink. And you don’t forget your first love…or, in this case…loves.
“Easy Street Wheat & 90 Schilling by Odell’s  and Fat Tire by New Belgium when I went to school in Ft. Collins, CO back in 1995… I never liked beer until I tried those!” Tait enthuses.

Since being bitten by the beer bug, Tait got his brewing certificate from the American Brewers Guild and has spent the last thirteen years brewing professionally. He says of his experience in the craft beer world:
” I love the people in our industry, and hands on physical work suits me, I couldn’t live in a cubicle, I like to go and move!  I only wear suits when my wife tells me to, I am a shorts and flip-flops kind of guy!”

Even though these days he is behind the scenes handling operations, sales, and distributions, he maintains his passion for the craft by brainstorming new creations with his talented brewers, Kevin and Don, on their impressively large (30 BBL) system. And the things they come up with…

When asked what his current favorite brew on tap is, Tait chose Cloud Breaker IPL (India Pale Lager) because “it has all the Qualities of a well made lager but with the Hop intensity of an IPA.  We used Bravo, Centennial and Citra Hops.”
And the rest of the menu is just as enticing. Naturally, once I tried one, I had to try them all. For research. And…quality control. That’s it. Gotta make sure they’re all as good. Spoiler: they are.
For example, the Coffee Stout is so on the nose, it causes you to want to start drinking before 10am just so you can start your day off with it. And the Mango Habanero beer is one of the most balanced pepper beers I’ve ever had. It’s juicy with just a slight heat at the end, which gives a fun kick without causing a four-alarm fire inside your throat.
Their Strawberry Blonde, which smells exactly like a strawberry patch, is even in demand at Busch Stadium! 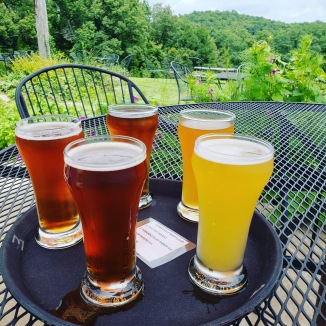 In fact, it’s all in such high demand that Charleville has expanded to a second location and tap room in downtown St. Louis, Missouri. Amongst the hustle and bustle of the city, Charleville provides a welcoming atmosphere with plenty to do, no matter what day of the week it is. While closed on Mondays, Tuesday- Friday offers a Happy Hour from 3-6pm and trivia every Wednesday night. A delectable food menu ties everything together into a can’t-miss experience!

So whether you are in the mood for a light, crisp beer in a relaxed, rural setting or a brew with a kick in an animated, metropolitan scene, Charleville has something for everyone!

To learn more about Charleville: