“Life is all about balance and following what the universe provides for you.”
-Gnash

For all the sweetness that malt provides for a beer, there must be a balance, otherwise it would be like drinking liquid candy. And while this may not be unappealing to many in theory, in execution it would pretty rough. Thankfully, hops steps in to even things out. You can think of hops and malt as Yin and Yang, or like a Sour Patch Kid. They are complete opposites but it just wouldn’t feel right if one were missing.

Hops are naturally occuring and are plants or, more specifically, flowers (Humulus lupulus.) The acids and oils contained within these flowers are what give bitterness to a beer. They can also add quite a bit of flavor, aroma, and stability. Hops also have the added bonus of being a preservative, which was especially helpful before the dawn of refrigeration.

Hops are a curiously fun part of the brewing process. Like with most ingredients, there are a multitude of hop varieties to chose from. Mixing and matching different hops can lead to some pretty interesting tastes, as can where and when you add the hops to the beer. Some hops additions are primarily to contribute flavor and/or aroma, while others are for going full-on bitter.

Hops is generally suspect #1 when it comes to people stating they don’t like beer.  Most people do not have palates at the ready like Spartan soldiers, and tend to find the taste off-putting at first, especially in hop-heavy beers. It does take some time and it has to be more of a Trojan Hops situation until either you conquer the hops or the hops conquer you. Eventually, once you do develop a palate, there can be something quite refreshing and magical (much like its scientific name sounds) about a hoppy beer. There are even people that fall in love with what hops can do in a beer and subscribe to the philosophy that the more, the merrier- these people are known as “Hop Heads.” 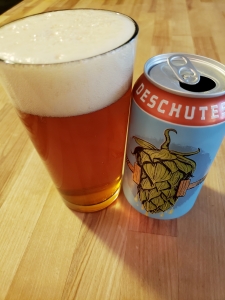 While hops do make an appearance in almost every beer, an IPA is where the hops really take center stage and it becomes evident how large their role really is. An IPA makes its presence known. A very distinct smell of hops is the first thing that will hit your senses. There are several different ways that hops can present themselves and, in this case, it is very fresh and citrus-y. This comes from the types of hops used which, in this case, are Citra and Mosaic. Not only do they make the beer stand out, they have really fun names too. The lovely thing about this IPA is that you know exactly what you’re getting from the name. The citrus notes in both aroma and flavor permeate every sip from start to finish.

However, if this is your first IPA rodeo, it definitely might be too much. So, let’s take a different approach. 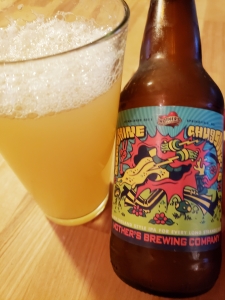 While this is technically still an IPA, it is a New England style IPA. This particular style has been creating quite a stir in the beer world, quickly evolving into the new up and comer that no one expected. So why all the fuss? Well, for a couple different reasons. First, just by looking at it, it becomes quite apparent that this beer is a little different. It is quite hazy, for one. But, beyond that, most of them look like your typical morning glass of orange juice. And, admittedly, the taste isn’t far off either. The enchanting thing about this particular style is that it bridges the gap between hops lovers and those that would just…rather not. This style allows for all of the flavor and aroma of hops but leaves out quite a bit of that bitterness, all while contributing a surprising juiciness. My favorite brewer likes to jokingly describe this style as “a beer and a mimosa had a baby.” And while that sounds like the wind-up to a really cringy punch-line, this beer is no joke.

So whether you’re a Hop Head or a Hops Shoulders, Knees, and Nope, it’s important to realize their impact on America’s second favorite past-time. And, who knows? With time, maybe everyone will jump on this hops craze-y train.